We are a Chicago-based DJ company that specializes in weddings and special occasions. Our mission is to create perfect environments for sharing lifelong memories using music, lighting, and detailed planning. We accomplish this by building and maintaining relationships with our clients, providing personalized customer service, and holding the highest standards in music and technology. 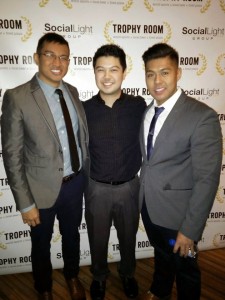 In 2001, shortly after graduating the 8th grade, Jeff purchased a set of Technics 1200s turntables and a mixer from his older brother’s friend.  That night he received his 1st DJ lesson of blending 2 records together. He spent countless days in his parents’ basement perfecting the essential skill of beat-matching.

Charles picked up his own set of turntables in 2002 and contacted Jeff to learn the craft. Little did they know it was the start of what would become their DJ business.  Along with Jason and other close friends, music and DJ’ing became a central part of their friendship throughout high school releasing multiple mixed CDs and spending gig money on vinyl records from Another Level Schaumburg.

Crossfade Entertainment, or X-Fade as we now call it, was officially born in 2003 when the group realized there was a true passion behind the craft and growing opportunities to DJ local parties.  Basement parties turned into family parties then eventually grew to community parties, holiday parties, cotillions, and other events.

X-Fade expanded their reach when Jeff attended U of I at Urbana-Champaign 2005-2010. Charles and Jason maintained gigs back in Chicago while Jeff had his run with college parties.  In 2011, the group officially became X-Fade Entertainment, Inc.

Since then, the team has been heavily involved in Chicago’s nightlife and wedding scene, honing their craft and perfecting their skills in order to be among the best in the business.  The trio held weekly DJ residencies at Estate Ultra Bar, Trophy Room, and Mad River while also maintaining a schedule of 20-30 weddings per year.  Other notable events include multiple New Years Eve parties at the Hard Rock Cafe, Hard Rock Hotel, and The Drake Oak Brook, a supporting set to the Far East Movement at Chicago’s renown Sound-Bar, and Las Vegas sets at Mandalay Bay’s Eye Candy and Palazzo pool.

If you’re looking for professional DJs with a passion for music and having a great time, you’ve come to the right place.

Please click through for more information on our services and how to book us for your next event!