We are a Chicago-based DJ company that specializes in weddings and special occasions. Our goal is to create an atmosphere for you to share lifelong memories with the most important people in your life. We achieve this by thoughtfully curating music, setting appropriate mood lighting, and carefully detailing your event. 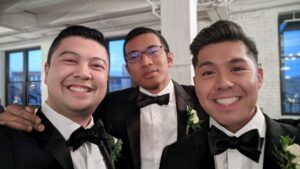 Shortly after junior high, Jeff purchased a set of Technics 1200s turntables and a mixer from his older brother’s friend.  That night he received his 1st DJ lesson of blending 2 records together. He spent countless days in his parents’ basement perfecting the essential skill of beat-matching.

Charles picked up his own set of turntables in 2002 and reached out to Jeff to start learning. Little did they know it was the start of what would become their DJ business.  Along with Jason and other close friends, music and DJ’ing became an essential part of their friendship throughout high school releasing multiple mix CDs and spending gig money on vinyl records from Another Level.

Crossfade Entertainment, or X-Fade as we now call it, was officially born in 2003 when the group realized there was a true passion behind the craft and growing opportunities to DJ local parties.  Basement parties turned into larger family parties then eventually grew to community parties, holiday parties, cotillions, and more.

X-Fade continued to grow as the three went through college. Jeff had his run with college parties at the U of I – Urbana/Champaign while Charles and Jason continued to spin in the Chicago scene.  In 2011, the group officially became incorporated and swiftly entered the wedding market.

Since then, the team has been heavily engaged in Chicago’s nightlife and wedding scene, honing their craft and perfecting their skills in order to be among the most trusted in the business. The trio held weekly DJ residencies at Estate Ultra Bar, Trophy Room, and Mad River while also maintaining a schedule of 20-30 weddings per year.  Other notable events include multiple New Years Eve parties at the Hard Rock Cafe, Hard Rock Hotel, and The Drake Oak Brook, a supporting set to the Far East Movement at Chicago’s renown Sound-Bar, and Las Vegas sets at Mandalay Bay’s Eye Candy and Palazzo pool.

If you’re looking for professional DJs with a passion for music and having a great time, you’ve come to the right place.

Please click through for more information on our services and how to book us for your next event!